I love when my writers tell me they’re studying the craft. I almost always dislike the results of their study.

It’s a great thing, especially as an amateur writer, to learn the “rules”; it’s a much better thing to learn why those rules exist – and to then feel confident about breaking them.

Exhibit A: A talented client of mine and successfully self-published romance author came to me for my opinion on -ing verbs. She’d read they’re bad, and uses them often. We’re scheduled to work on her third book this summer, and she wants to give it her best self-edit before it lands in my inbox. Should she edit out the -ing verbs?

My reply: Maybe, but probably not. The “rule” is to avoid -ing verbs; the why is because -ing verbs are so often accompanied by weaker “to be” or “to have” verbs. She was running. He had been singing. They were playing. The -ing verb is not the problem. Since her -ing verbs are more often used to begin sentences, not in conjunction with to-be or to-have verbs, she does not have this problem. In fact, cutting out all -ing verbs is likely to weaken this particular author’s writing.

Learn the rule. Learn they why. Break the rule – cautiously at first, then with confidence.

The only rule in fiction is there are no rules.

1. Variation is King. Learn about all kinds of sentence structures (syntax). Experiment with them. Use long sentences, short sentences. Fragments. Start your sentences with a prepositional phrase. Start them with an -ing verb. A pronoun. Your syntax should flow, should sing, like music. Like this: 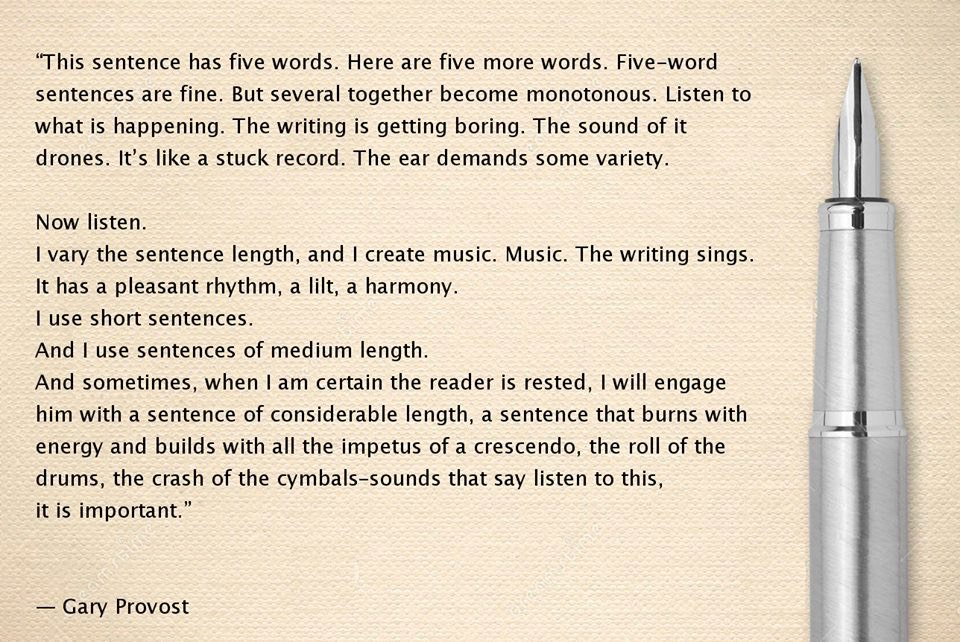 2. Only break rules for intentional effect. Don’t break them willy nilly or without learning about them first. That’s the mark of an amateur writer who hasn’t studied her craft. You won’t fool anyone; it will be obvious. The rules matter. Your respect for language matters.

Does your writing mostly follow the rules, and then occasionally, deftly, break them? Is it impactful? Want to know for sure?

Contact me to perform a critique of your first chapter. I encourage you to read and study the craft, and never stop studying, even when you’re bigger than Stephen King. But a personal evaluation and in-depth feedback of your writing could be much more helpful, especially when you’re just getting started and trying to navigate the so-called do’s and don’ts.

What rules do you just love to break? I want to hear from you. 🙂